All Things Bright and Beautiful

While we were home in Ohio, we got to spend a few days with Paul’s brother Jake and his wife, Stephanie. They had returned from their work in China to attend our Pastor’s final missions conference before he retires. While they were here, however, they got a much better reason for being here, and staying here for a little while.

Monday, September 17, they learned that they had been chosen by a birth-mother to adopt her baby. There weren’t many details, and it was all a little hush-hush, as these things are not always “sure-things.” We were “out of the loop” at this point, but a few days later the potentially amazing news was shared with us, and we began to pray that the Lord’s will would be done in the situation. But we really hoped and prayed that this sweet baby would soon be our niece!

We knew that they may have to leave when the baby was born, and that next Monday, it happened! Paul had just preached at Grace, and we were hanging around talking with church members. Jillian asked me if I knew what gender the baby was, but people had been asking me for days. I still didn’t know! Well, what I also didn’t know is that the baby had been born! We hugged Stephanie and tried to find Jake. We were all a little shocked at how quickly everything had happened, but we were mostly overjoyed! There were many plans and decisions to be made in the next few hours.

Jake and Steph flew out very early Tuesday morning. We were sad to see them go, as it had been a year since we had seen them last, but we were excited for them to go meet their new baby! (Still no revealed gender). We anxiously awaited news all day, and we finally heard from them late in the afternoon. SHE was healthy, she weighed 6 lbs. 7 oz. and had a full, dark head of hair! I was ON MY WAY home from Carter’s and was very disappointed I hadn’t known the gender just a few minutes earlier!

That night, we received pictures and went to bed beaming at the thought of our brother and sister-in-law finally feeling the incredible joy of parenthood. She was absolutely gorgeous, and our hearts ached to go meet her. We know we can’t yet, but as soon as the Lord will allow, and they are in Kentucky, Bowling Green here we come! We gotta meet our tiny, beautiful niece! 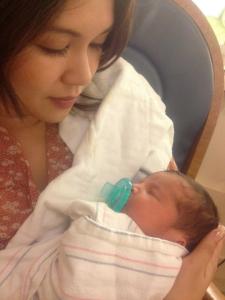 I am so thrilled that Jolynn and Galilee will be so close in age. I can just see little JoJo and GiGi running around and getting into everything. I can hear giggles and sing-alongs as they play dress up and “have tea.” I hear…Hindi…and Mandarin? Well, the distance will make things interesting, but I pray the Lord will allow our families to be close despite the distance between us.

We are beyond excited for Jake and Steph, and even more excited for Galilee who has ended up with two people who I know will be amazing parents! We are confident that they will raise her for the Lord and that we will see her doing great things with her life for Him!